In case a certain disaster-of-the-month wannabe crisis that we are officially no longer discussing has distracted you from our standard collection of wildfires, mudslides, and other fun summer disasters, allow me to bring you up to speed: it's about to get really, really hot out. Like, go check on your grandma hot. They're saying 80s/90s here, triple digits in the Valley, and that number may still be creeping up, so naturally you'll want to dress to keep cool. I'm here to tell you to be careful.

Look, I know that I've had plenty to say about bad women's fashion before, but for the ladies, I have very little advice to offer here: when it gets hot, you're going to wear what you're going to wear, and if it's wrong (and/or wrong on you), society will let you know about it. But for the men, I regret to say that we as a society have allowed some obscene fashion crimes to go on for way too long. Yes, heat makes you dress differently than you would otherwise, but there are some lines that we clearly need to re-draw. 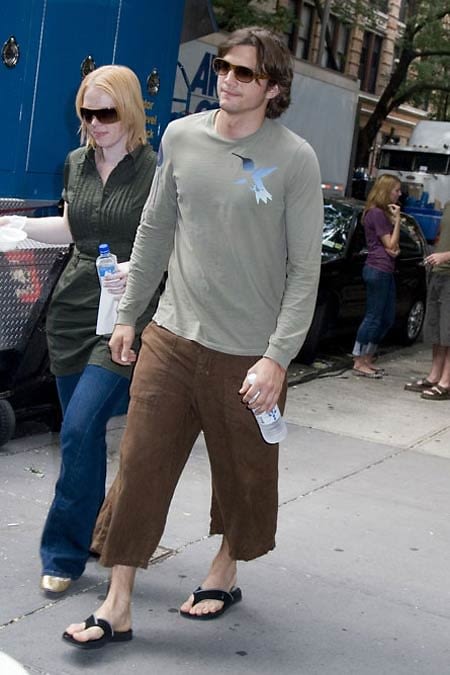 The fact that the first two images of "men in capri pants" that came up when I image-searched were both of Ashton Kutcher does not bode well for his future as an action star. Look, Ashton: you used to be an underwear model or something else that I don't feel like Googling, and I'll grant you that you're a good-looking fellow. And even still, I can promise you that there's not a woman on the planet getting excited about the prospect of seeing your ankles.

Men's ankles can only be one of two things: normal or gross. Never sexy. Capri pants make you look like you're a weirdly proportioned mega-midget with oversized thighs and little baby shins, like a giant chicken or something. Yes, it's very "European," but so are men's ponytails, socks with sandals, and Fascism, all of which I also hope you have the good sense to avoid.  [Ashton's Capris via and via]

We've been over this, but the mank, or the man tank top, is something of an epidemic. Earlier, we gave out special dispensation for the heat of Coachella, but I'm inclined to say that any sort of a la carte permission is a slippery, dangerous slope. At the very least, we can say this: anywhere you wouldn't be shirtless, you shouldn't be wearing a mank. So you're good at the beach or pool, a 5-on-5 basketball game, your own home, and (we guess?) multi-day outdoor concert festivals, but that leaves a lot of uncovered ground. I should never have to see your armpits at the pizza place, at Target, or at the movie theater. I'm really kind of disappointed that I even have to explain this, actually.

And that goes double if you have a really hairy back. 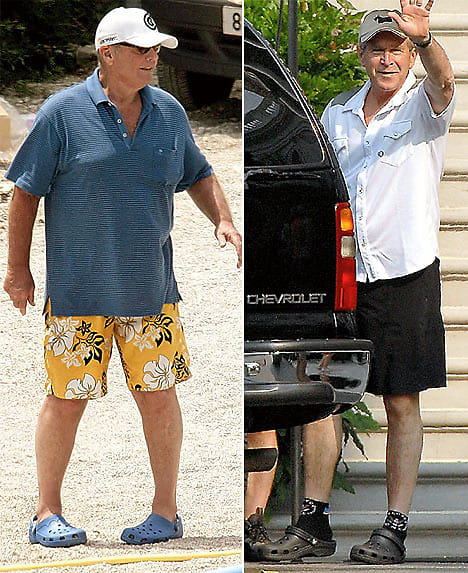 One way that bad, bad fashion tends to happen is when a clothing item specifically designed for a purpose is reappropriated for an entirely different, suddenly non-functional use. This has given us such horrors as the popped collar and cargo pants, but at least with those, we understood them to be aspirational, indicating that the wearer wanted to look like a rich New Englander or a special forces commando, respectively. Such an excuse is not built into Crocs, unless you've been harboring a deep-seated desire to look like a gardener or a feeble retiree. Which one are you, George W. Bush?

Seriously, what's with the Crocs? Are you afraid that you might end up submerged at a moment's notice? Did you make a bet with your Teva-wearing father that you could find footwear that was even more laughably awful? These things look like the mandatory official footwear of North Korea or something, and I simply can't believe you would willingly subject yourself to that.  [photo via] 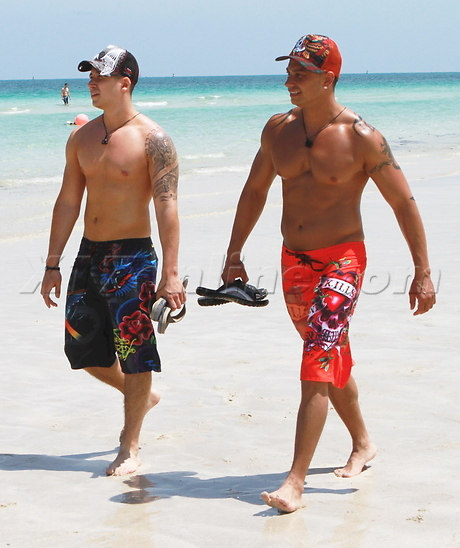 If wearing a giant, baggy pair of trunks with a rainbow dragon on it doesn't get you laughed off the beach, then you're on the wrong beach. Think of this rule as an offshoot of the more general one, "Don't Wear Ed Hardy, Ever." [via] 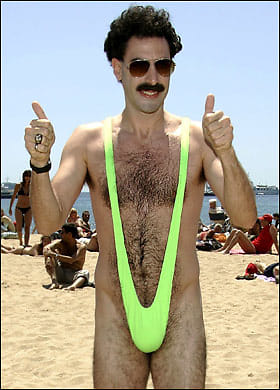 Look, I'm not saying it's right for every situation, but it's WAY better, and more tasteful, than what Vinny and the boys are rocking in the entry above.