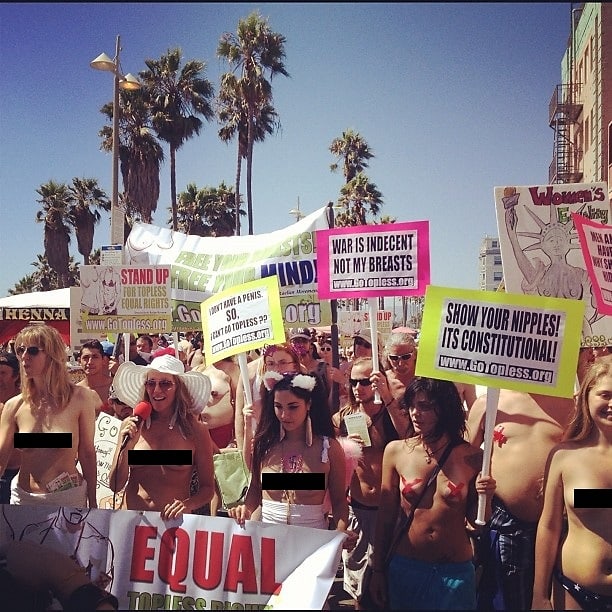 Now in its fifth year, the annual unrestrained titty brigade once again took to Venice Boardwalk yesterday for Go Topless Day. Amid the daily beachside freakshow, bare-breasted participants marched down the path, tatas a-bouncin', wielding signs in support of their meaningful cause which is of course to fight the double standard of topless laws for men and women. I, for one, would counter that we have a bigger issue on our hands, and that is we have yet to pass any kind of legislation on exposed man-boobs in public.

We can't ever un-see moobs and I don't think I'm alone in my feeling that they're a far more offensive sight than any female's. If a man has a rack that could easily fill out a 38B-cup, he should have to keep it on, or wear a mankini at the very least. That, to me, is the real injustice here.

But I digress, so let's get to it and take a look at yesterday's brave crusaders of the Right to Bare Breasts (for anyone still unclear, these are definitely NSFW).

For more on what the Go Topless fight is all about and its wack ties to a UFO cult, go HERE.