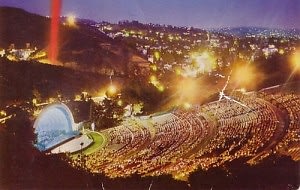 There's no wrong reason or way to go to the Hollywood Bowl, given that it's quite possibly the greatest concert venue in the United States. It's that awesome. But that doesn't mean there aren't some extra amazing, truly unique nights and experiences there that merit special consideration. We think Pixar In Concert, with the Hollywood Bowl Orchestra playing memorable musical moments from classic Pixar films set to visually stunning film clips, probably slots into that "special" category. That's why we're pleased to announce the winner of our free ticket giveaway!

Yes, if you know Sara Gershfeld, also known in the Twitterverse as @behaveinLA, now would be a good time to tell her how much you love her, as she just might choose you to be her date to Pixar In Concert tomorrow night at the Bowl. What did Sara have to do to win a pair of really great tickets to this show? Well, just tweet at us that her favorite Pixar character ever is Tom Hanks' Woody from Toy Story. Pretty darn simple, right?

Congratulations, Sara! And to all of you who didn't win, don't get too down on yourself, as we're going to be giving away great Hollywood Bowl tickets, and plenty of others too, all summer long. Just don't miss a single day over here at G of G, because you never know when the next great contest is coming!