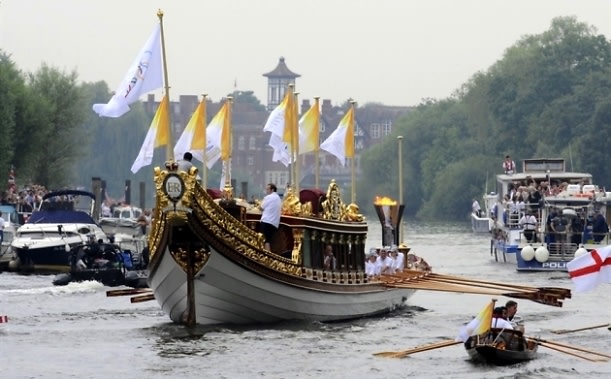 In yet another major Southern California weed bust, the Coast Guard seized roughly 8,500 pounds of marijuana worth $7.7 million on floating small boat off the coast of Los Angeles. [KTLA]

After being lit by the sun's rays in Greece followed by a 70-day journey around the U.K. covering 8,000 miles, the Olympic torch made the final leg of its relay today in London as it was carried down the River Thames. [NBC]

Last night the audience of Madonna's concert in Paris booed her and chanted the French word for "slut"/"whore" (FYI it's salope) after she only performed a 45-minute set of eight songs. [NME]

The internet says Amanda Seyfried and "Dexter" star Desmond Harrington are dating after being spotted on date at The Pikey this week. [CelebBuzz]

Lady Gaga posted a photo of herself hanging out with Lindsay Lohan and Ellen von Unwerth at Chateau Marmont, then another of herself just being naked and weird on a couch. [E!]

[Olympic torch carried down the River Thames today via]