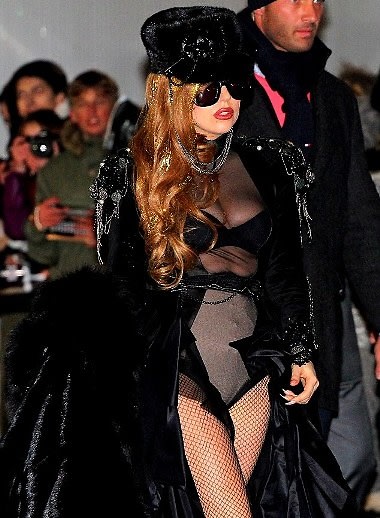 -We know for sure Anne Hathaway didn't wear underwear last night to the NYC premiere of Les Misérables since she pulled a Britney/Lindsay/Paris and flashed photographers her nether regions while climbing out of a car. [E!]

-Lady Gaga, who showed up looking like a freak as usual to the airport in 17-degree Moscow in a mesh bodysuit and fur hat safety-pinned to her ear, will perform at The Rolling Stones' final anniversary show this weekend in New Jersey. [The Sun]

-Yesterday a court ordered the removal of about 100 of those obnoxious digital billboards around L.A. [KTLA]

-Following her OD last week that landed her in the ER, Brooke Mueller has checked into rehab for the 19th time citing an Adderall addiction. [TMZ]

[Lady Gaga in Moscow via]