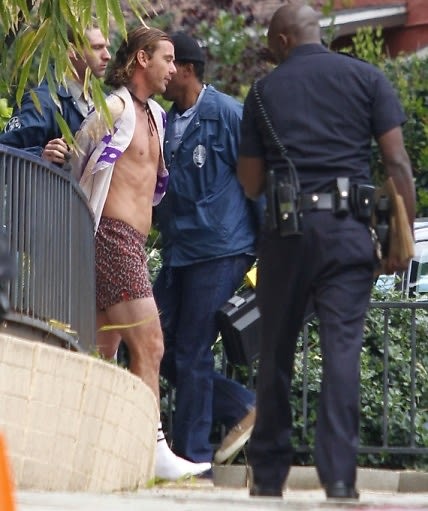 Troubled singer and Whitney Houston ex-husband Bobby Brown arrested, gets a DUI for driving with a blood alcohol content over the .08 legal limit while cruising around Reseda yesterday around noon. [TMZ]

Tickets will be available for purchase until 7:45pm for the multi-state Mega Millions lottery jackpot, whose winning tickets have not been sold yet as of this morning, estimated to be roughly $363 million, the third largest in the history of the lottery's jackpots. [KABC]

Geraldo Rivera issues a public apology for his completely outrageous, inflammatory comments on the Trayvon Martin shooting wherein he claimed the black teenage victim was partly responsible for his own death for wearing a hoodie. Unreal... [HuffPo]

Former NBA star Dennis Rodman faces jail time for owing at the very least $808,935 in back child support and $51,441 in back spousal support, and is "extremely sick" and "broke" according to his attorney. [KTLA]

In case you ever wondered what Gavin Rossdale might look like getting arrested in his undies, some photos of this scenario have emerged as he shoots a scene for Sofia Coppola's Bling Ring film project in which he plays a "bar owner douchebag." [HuffPo]