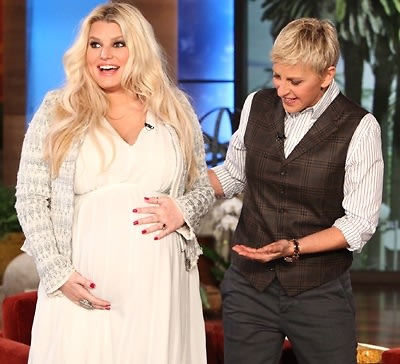 BREAKING: After gaining one and a half Olsen twins in baby weight during the longest, most confounding pregnancy in recorded history, Jessica Simpson has FINALLY popped that baby out for real this time, a healthy girl they named Maxwell Drew Johnson weighing 9 pounds and 13 ounces. [TMZ]

Whether by plane or automobile, expect major travel delays in L.A. today with airport workers holding a May Day strike protesting unfair labor practices at LAX and what are expected to be huge May Day marches in around downtown L.A. that will result in several highly inconvenient road closures. [KTLA] [KTLA]

Some of California's most esteemed chefs are coming together with new, humane practice rules to fight the July 1 state ban on restaurants to serve foie gras if the birds have been force-fed to enlarge the size of their liver. Where do you stand on the foie gras issue? [KABC]

Teen bride and noted deep thoughts Tweeter Courtney Stodden just dropped her first single, y'all. And it's called "Reality" which is pretty ironic considering that's something above all else she seems to have a very tenuous grasp on at best. [E!]