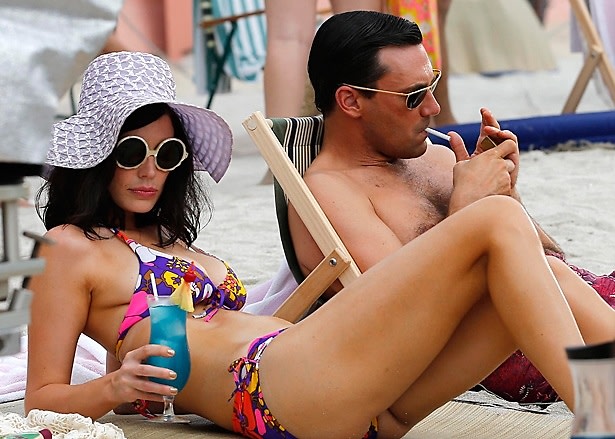 -Check out Jessica Paré and Jon Hamm AKA Mr. and Mrs. Don Draper in their retro chic beachwear while filming scenes for next season's "Mad Men" in Hawaii. [DailyMail]

-A two-foot leopard shark, believed to have been scooped out of the sea by a bird, fell from the sky, landed in the middle of a San Juan Capistrano golf course and survived. [LATimes]

"Oh, fuck that. I don’t fucking mix with anybody—British or any other musicians. I tend not to hang out with musicians. You know why? Because they’re fucking idiots."

-Noel Gallagher, in response to questions about a possible Oasis reunion or forming some kind of famous British musician supergroup. [NME]

-While being transported by his driver, Diddy's Escalade crashed in front of the Beverly Hills Hotel yesterday. Everybody is okay. [TMZ]