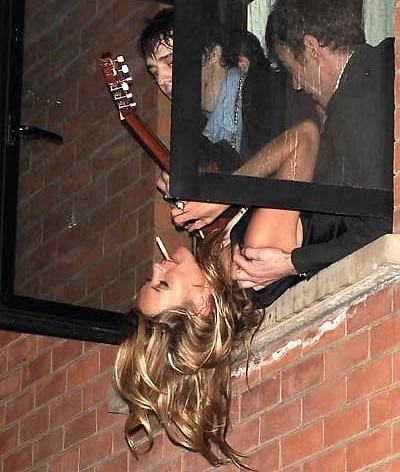 If you don't want to sit wedged between two strangers the next time you fly, it'll probably cost you since airlines are increasingly tacking on additional fees of $25 or more per flight for window and aisle seats. [AP]

Urban Lion Alert!: Streets in downtown Santa Monica near the Promenade were closed this morning when a baby mountain lion who evidently lost his way was found roaming around in the courtyard of an office building. Simba, seriously? WTF, dude?? [KTLA]

While promoting some thing at Cannes, Pete Doherty tells the press that Kate Moss, his ex of five years now married to Jamie Hince for almost a year, still drunk dials him. Super models and heroin-addled rock stars—they're just like us! [Mirror]

Miley Cyrus be werkin' some serious sideboob while taking a neighbor's vintage car out for a spin and running down the street barefoot in her Toluca Lake neighborhood. Not mad at that. She's 19. [Radar]

Following a very unpleasant encounter with Whitney Houston's family at the Billboard Music Awards Sunday night in Las Vegas, Ray J is currently hospitalized for apparent exhaustion and dehydration after he's discovered "out of it" in his hotel room. [TMZ]