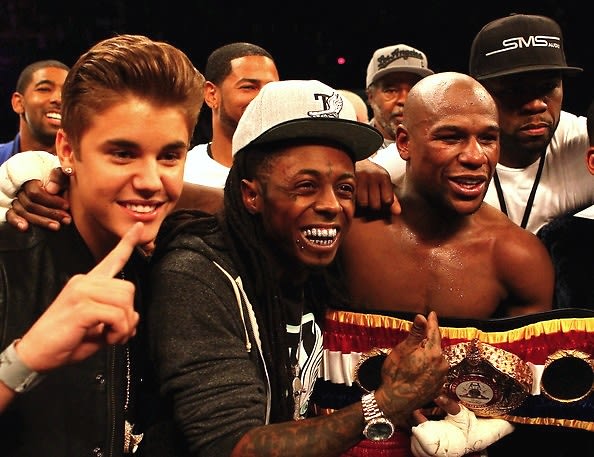 If you were wondering why in the bloody hell Justin Bieber was in Floyd Mayweather Jr.'s winning corner Saturday night after the Cotto fight, don't worry—it's just because they're super tight now since the boxing champ is Bieber's new mentor. [TMZ]

The Avengers sets a new domestic revenue record with its debut weekend raking in a whopping $200.3 million at the box office, far surpassing the previous record of $169.2 million by Harry Potter and the Deathly Hallows. [KABC]

Kanye West continued his campaign to be the biggest celebrity assclown we actually care about this weekend when he unloaded a laundry list of his personal fashion "hates" on Twitter, including "big ass striped scarves," "khaki trench coats with jeans and off brand work out sneakers," and "long ass sideburns with line up RnB beard." [E!]

Dania London Suarez, the prostitute who claims she was one of the escorts involved in that sordid Secret Service sex scandal in Cartagena, tells the "Today" show the agents for whom she provided her services are "completely stupid, idiotic people." [Radar]

Ugh. Woody Allen had dinner with none other than Lindsay Lohan Saturday night at NYC's Philippe. Yeah, he fully went there. [HuffPo]