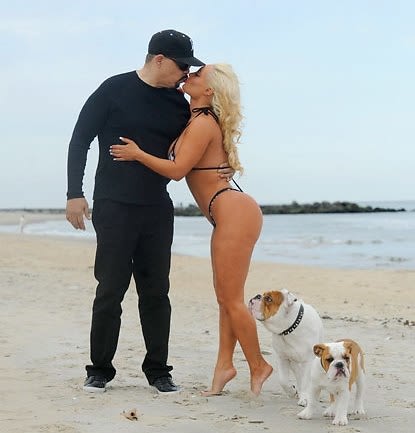 A hacker has stolen somewhere in the neighborhood of eight million passwords of eHarmony and LinkedIn users and posted them online so you should probably reset your password immediately if you have accounts with either of those sites. [KTLA]

President Obama gets major support from L.A.'s LGBT community last night at two fundraising events where he is hailed the "first gay president," is expected to raise $4.6 million from his SoCal trip after he finishes after one final fundraising event this morning in View Park. [KABC]

I'm really at a loss if these photos of Coco prancing around a New Jersey beach with her stunningly enormous curves, whether artificial or real, barely contained by a thong string bikini is what men consider sexy. [Radar]

Kourtney, Khloe and Kim Kardashian are launching a cosmetic line to be called Khroma Beauty so that  the rest of America can wear a full face of tranny makeup just like them. God help us. [E!]

And here's a video of Charlie Sheen going completely mental on a security guard who wouldn't let him back into the Staples Center last night and tells her to "fucking blow my balls, alright, you fucking asshole," after he stepped out for a cig break during the Kings game. [TMZ]