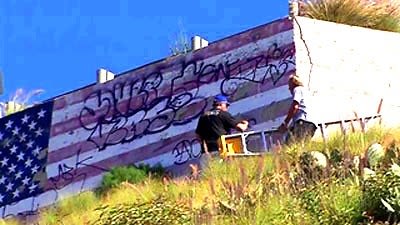 Yogi Returns!: Meatball, the 400lb. black bear found eating meatballs out of a La Crescenta home's garage refrigerator earlier this year and was subsequently taken several miles deep back into the forest by authorities, resurfaces once again in residents' backyards. [KABC]

All spelling and grammatical errors aside, I'm kinda loving Deadmau5's Twitter reaction to Paris Hilton's debut as a DJ at a concert in Brazil and announcement of her upcoming album with Afrojack:

"Its over. [...] To be fair... the mayans saw this shit coming. thanks [Afrojack] we appriciate it. we really really do. you are the man. thanks. i kinda feel partially to blame here. don't worry. ill unfuck this." [TMZ][Twitter]

Iconic "Jeopardy!" host Alex Trebek, 71, is expected to make a full recovery and return back to work after suffering a mild heart attack over the weekend. [E!]

A couple of good samaritans, Bart Avery and Barry White of Lancaster, took it upon themselves to fix the recently tagged beloved American flag mural on a Hollywood Hills retaining wall commemorating 9/11 by painting over the graffiti to restore the original design. [KTLA]