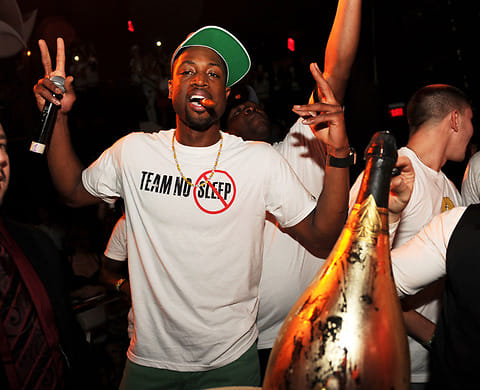 Tony Parker files a $20 million lawsuit against the now defunct W.i.P. nightclub in NYC, the site of the unbelievable Drake vs. Chris Brown brawl last week where the NBA star was caught in the melee and hit with a broken glass suffering a scratched retina. [Radar]

After winning the NBA finals last night, Dwayne Wade, LeBron James and the rest of the Miami Heat raged face at LIV where they drank out of $75k Ace of Spades champagne bottles and James grabbed a mic to rap along to the music until 6am, all while wearing a shirt with a vampire version of his face on it. We'd expect nothing less. [TMZ]

After dating on the DL for a few months, Giovanni Ribisi and Agyness Deyn elope, quietly marrying at the L.A. County Registrar's office last weekend. [Us]

Though he's defended him throughout the child sex abuse trial, Matt Sandusky, adopted son of former Penn State assistant coach and alleged serial pedophile Jerry Sandusky, drops a bomb with news claims that he too was sexually abused by his adoptive father. [KABC]

[Dwyane Wade at LIV photo via]