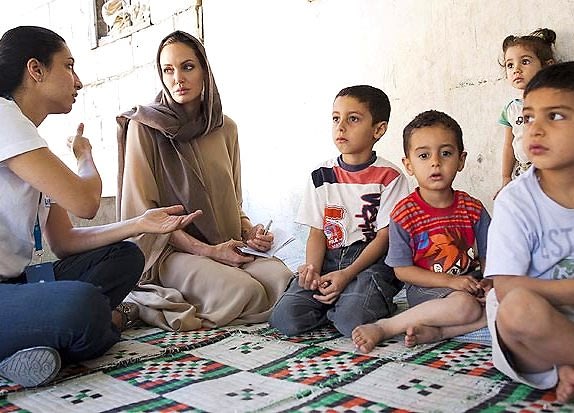 As expected, yesterday Apple unveiled the iPhone 5, the slimmer, lighter newest rendition and its many features of our favorite gadget set to hit shelves September 21 with pre-orders beginning tomorrow. [KTLA]

Kate Gosselin modeled several looks in a runway show at New York Fashion Week. No words. It was for charity, but still. [Radar]

Musion, one of the British companies that helped create the eerie rapping and dancing Tupac hologram performance at Coachella will stage a mystery "iconic British superstar" hologram at London's Best Of Britannia event next month. John Lennon? [NME]

As a UN special envoy, Angelina Jolie went to Turkey and Lebanon to meet with Syrian refugees and the country's diplomats to call for an end to violence in Syria. [BBC]

[Angelina Jolie with Syrian refugees via]