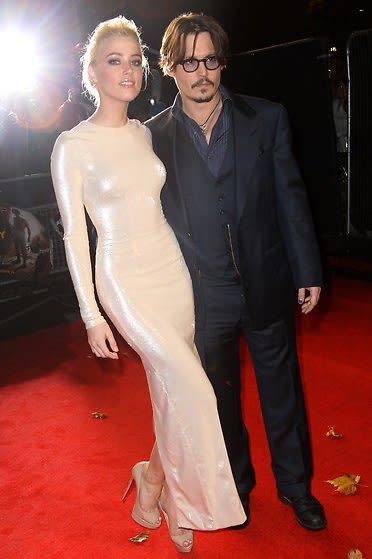 Following his official split from long-time partner Vanessa Paradis, rumors abound that Johnny Depp and his openly bi-sexual Rum Diary co-star Amber Heard are having a not so secret love affair wherein she regularly makes out-of-state visits to his set and he bought her a pony. [DailyMail]

What is being referred to as "Ramp-Jam," the year-long project to rebuild all of Wilshire Blvd's freeway on- and off-ramps, begins Friday night when crews close the westbound Wilshire on-ramp to the 405 and the northbound 405 off-ramp to westbound Wilshire for three months. Expect to discover new meanings of hideous traffic. [KABC]

More disturbing human behavior comes from North Carolina today where convicted felon Travis Glaspie was chased and caught by a police dog when he, the human, bit back and chomped down on the K-9's ear so hard it split in two. [KTLA]

Brace yourselves, Khloe Kardashian and Lamar Odom may be full-time L.A. residents once again after a brief stint in Dallas as the former Laker is apparently in talks with the Clippers, the first NBA team he was drafted to in 1999. [Radar]

Kanye West reportedly has an "ingenious plan" to create an album comprised of nothing but animal noises as he has recently become obsessed with roars, barks, and other jungle noises. There's a really awesome moo/oink Kim Kardashian joke in there somewhere. Also, if true, it's not doing anything to make him seem like less of an asshole. [NME]