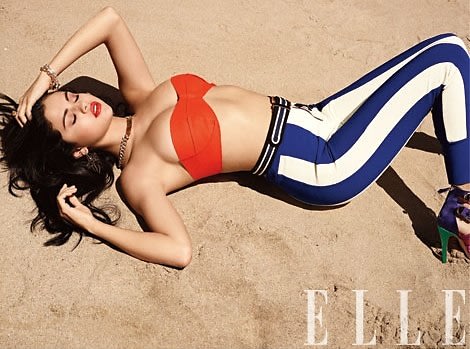 Ernst Henning Eielsen, one of five judges in the trial of Anders Breivik, the man responsible for the horrifying mass murder of 77 in Norway last July, is caught by news cameras playing solitaire on his laptop for 16 minutes in court during the testimony of an expert witness. [ABC]

Today is apparently National Best Friends Day so in honor of the holiday, here's a collection some famous BFFs throughout the course of history. [Buzzfeed]

With this Elle cover shoot of a very sexified Selena Gomez, Justin Bieber's mainest shows the world she's all mature and stuff, no more of that Disney star nonsense. [Elle]

In the wake of two sexual assault lawsuits filed by male masseurs against him and reports of a six-year love affair with his male pilot, John Travolta resurfaces for the first time at an event to honor Shirley MacLaine. [TMZ]

In case anyone cares, Matthew McConaughey and longtime girlfriend Camila Alves, with whom he has two children, are getting married this weekend in a very small Texas wedding. No word yet on whether he'll put on one of his naked bongo drum performances for guests. [E!]

[Selena Gomez for Elle photo via]