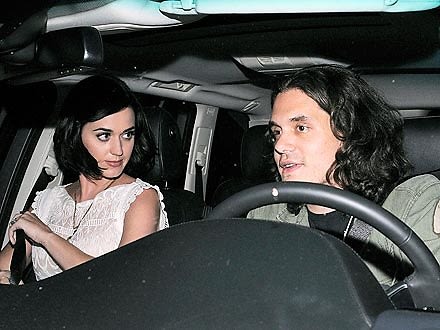 Get ready for the final Ryan Lochte vs. Michael Phelps showdown tonight when they compete in the 200-meter individual medley at the man-dolphin Olympics. [HuffPo]

Katy Perry and renowned douchelord John Mayer were spotted leaving Chateau Marmont last night after an apparent dinner date. Girl, you're so much better than this. Get rid of this dipshit. [Radar]

Though the future of "Curb Your Enthusiasm" remains uncertain, HBO announces a new Larry David movie that will star LD and possibly Jon Hamm and Michael Keaton. Let's make it happen, guys. [Deadline]

A man records a 7-Eleven clerk going ape on him after he declined the employee's invitation for his toddler son to "ride her broom," prompting her to explode with eff-you fingers in an expletive-peppered, batshit tirade and chase them down in her car when they left the store. Do we even need to tell you this happened in Florida? [KTLA]

Someone, who is probably going be arrested, prank called 911 reporting a possible home invasion and shots fired—a prank method known as "Swatting"—at Miley Cyrus' L.A. home last night, immediately sending multiple LAPD units with guns drawn and a chopper to the empty home where they discovered it was a hoax. [TMZ]