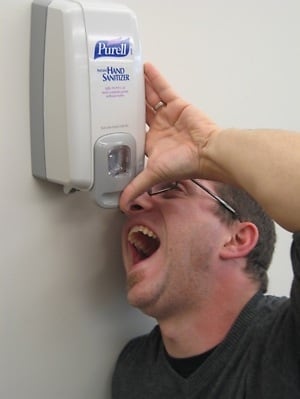 Is it possible former "That 70s Show" costars Mila Kunis and Ashton Kutcher are nothing more than platonic friends even though they just took a weekend beach getaway near Santa Barbara where they were spotted shopping for flowers? [TMZ]

Parents, hide the Purell!: there is a dangerous new trend growing amongst teenagers in the L.A. area who are getting creative in how to get their crunk on by drinking hand sanitizer. Whatever happened to the good old days of Smirnoff Ice? [KTLA]

After their very public struggle to get pregnant as captured on their reality show, Giuliana Rancic and Bill Rancic proudly announce they are expecting their first child via gestational surrogate this summer. [HuffPo]

In the second incident in which a patron left in an ambulance in recent months, a man dining at Las Vegas restaurant Heart Attack Grill, which offers a "Quadruple Bypass Burger" and free meals for diners over 350lbs., suffered from none other than a heart attack while chowing down on a 6,000-calorie burger. [KABC]