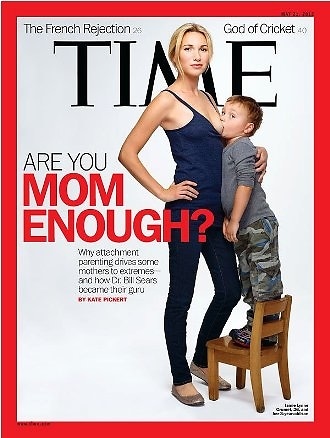 It wasn't that whole brutal beating incident, his proneness to violent temper tantrums or that he's in general a shameless imbecile that pushed Rihanna to unfollow ex Chris Brown on Twitter. It was his incredible delusion that he could rap. She stopped following him after he tweeted a link to his new freestyle remix of Kanye West's "Way Too Cold" in which she perceived diss in his "rap" lyrics. [MTV]

Congratulations to Time Magazine for creeping everyone out by featuring a truly unsettling photo of a mother breastfeeding her upright-standing three-year-old son on the cover. [KABC]

Hate to break this to you but those rumors that there was trouble in paradise for Ryan Gosling and Eva Mendes are probably not true since they were spotted holding hands as they strolled through NYC yesterday after grabbing some takeout. Sorry. [HuffPo]