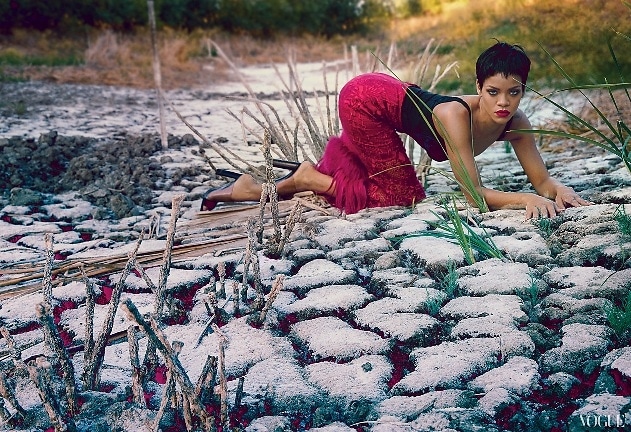 -Daredevil Felix Baumgartner took a helium balloon to the edge of space and plunged safely down to earth faster than the speed of sound before landing safely in New Mexico yesterday and setting a new world record for highest jump. [KTLA]

-The Rolling Stones just announced they'll be going on a four-show tour to celebrate their 50th anniversary, with two dates in London next month and only two dates in the entire U.S., both of which are in New Jersey in December. [NME]

-On his way out from dinner in Miami with Kim Kardashian by his side, Kanye West went ape on a paparazzo who dared ask questions about Reggie Bush. [Radar]

-Rihanna covers the November issue of Vogue and says she hasn't been on a date in about two years because no one asks her out. [Us Weekly]

-Prince and Lady Gaga may or may not be collaborating on songs together to be featured in the upcoming Baz Luhrmann-directed rendition of The Great Gatsby. [Vulture]

[Rihanna in Vogue November 2012 by Annie Leibovitz via]