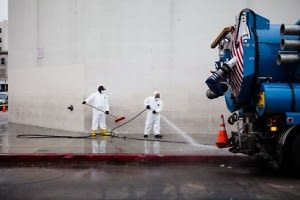 The unexpectedly quick divorce settlement between Tom Cruise and Katie Holmes? You can thank little Suri for that. Apparently both sides were gearing up for legal war when it was impressed upon them how damaging the whole thing would be to their daughter. Give them credit for that. [TMZ]

Now that the 13-day cleanup sweep of Skid Row has completed, the numbers are in, and they're pretty crazy: five tons of trash, hundreds of hypodermic needles, and (feel free not to read the rest of this sentence if you're eating) multiple five-gallon buckets full of human waste. [LAT]

With $50 bag fees and minimal legroom, a Spirit Airlines flight isn't exactly fun even when it goes smoothly, but at least most of us didn't have to sit on a tarmac in Houston for 10 hours when an elderly blind man started flipping out during an ostensibly nonstop LAX-Ft. Lauderdale flight. Kind of puts the 9 hours I spent in the Charlotte airport last week in perspective. [LA Weekly]

Former Raiders D-lineman Anthony Wayne Smith has been charged with more three unsolved murders, in addition to a 2008 murder he's currently being retried for. Unknown motivations notwithstanding, this would make Smith the first ever professional athlete serial killer, which is either shocking or, based on your familiarity with the Raiders and their fans, slightly less so. [LA Weekly]