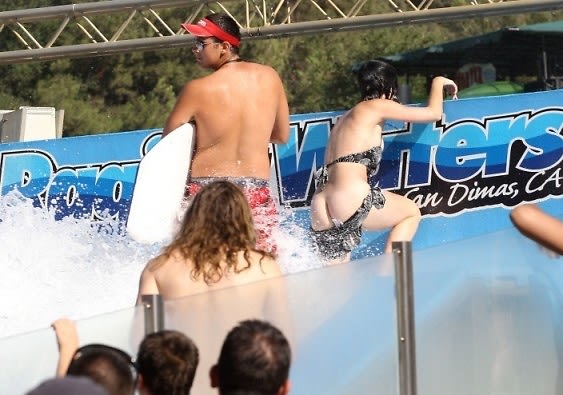 After years of supposed sightings, there is now photographic evidence positively confirming a mountain lion named P-22 lives in Griffith Park and must have either found his way to bridges, underpasses, or simply sprinted across traffic on the 405 and 101 freeways to get there from the Santa Monica Mountains. [LATimes]

Katy Perry was quite literally caught with her pants down by photographers who snapped her unintentionally mooning onlookers when her bikini bottoms fell down on a water park ride slide thingy during a recent trip to Raging Waters. [Superficial]

A gigantic Burmese python captured in the Everglades breaks records in length at 17 feet, 7 inches and roughly a foot wide, and sets new records its number of eggs, carrying 87 eggs total. Good luck with all that, Florida! [KTLA]

Here's a look at the $4.9 million waterfront estate Taylor Swift just purchased in Hyannis Port on Cape Cod directly across the street from Ethel Kennedy, presumably to be close to her new boyfriend Conor Kennedy. [Radar]

[Katy Perry with bikini bottoms down at Raging Water via]