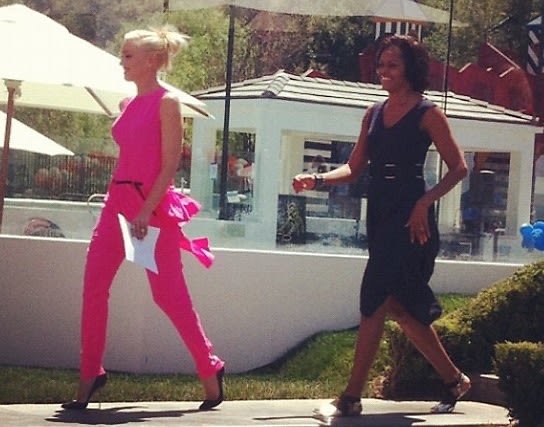 After attending weekend Obama fundraising events including "Sunday of Fun" at Gwen Stefani and Gavin Rossdale's home with the likes of Jeffrey Tambor and Nicole Richie, Michelle Obama wraps up her L.A. tour this evening with a "Tonight Show" appearance. [KTLA]

Jennifer Aniston and boyfriend of over a year Justin Theroux are officially engaged to be married as of Friday when he popped the question. [HuffPo]

Miley Cyrus got her hair chopped off in a major way yesterday by celebrity stylist Chris McMillan and now has a platinum blond pixie-ish 'do she is very pleased with and proud to sport. [Radar]

At the mention of the Kardashians during a recent interview with The Guardian, Jeremy Renner rolled his eyes and had this to say:

"Oh, all those ridiculous people with zero talent who spend their lives making sure everyone knows their name. Those stupid, stupid people."