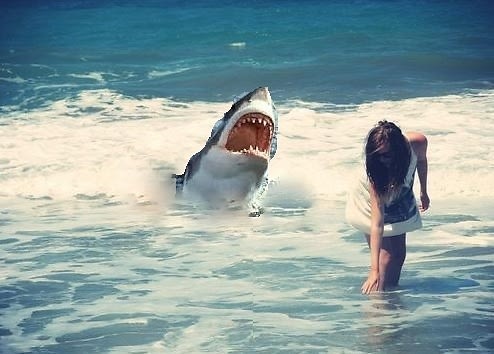 Mmmkay, so here's a video of a large great white shark circling a small fishing boat a few miles off the coast of Venice Beach yesterday, plus a look at the bite marks it left on the boat's motor. [KTLA]

Hannah Hooper of Grouplove says her friends who grew up with Christina Aguilera swear her royal dirrty-ness smells like hot dogs. I have no problem believing that. [Bossip via Jezebel]

Joe Simpson, the minister-turned-stage dad father of Jessica Simpson you may remember for his comments on his "sexy" daughter's double Ds, er "suckers" in his words, spent a night in jail after getting arrested for DUI while cruising Ventura Blvd. [TMZ]

It must be getting serious between Taylor Swift, 22, and her new boyfriend Conor Kennedy, 18, since she had him meet her parents in Nashville. [HuffPo]