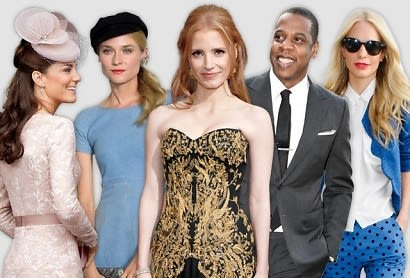 After tweeting the email address of NBC Olympics president Gary Zenkel out of frustration over a tape delay in the network's coverage of the opening ceremony, Twitter suspends the account of Guy Adams, an L.A.-based reporter and correspondent for The Independent British newspaper. [NYDN]

Currently a free agent, former L.A. Lakers forward Matt Barnes is arrested last night while strolling through Manhattan Beach on an outstanding warrant for driving on a suspended license and threatening the police officer who approached him. [KABC]

Vanity Fair's 2012 "Style Issue" will be released with two different covers, one featuring Jessica Chastain and the other Kate Middleton, who are joined by the likes of Jay-Z, Stella McCartney, Diane Kruger, Colin and Livia Firth on this year's International Best-Dressed List. [Vanity Fair]

Henry Hopper, 21-year-old son of the late Dennis Hopper, is being sued for unspecified damages by the parents of a 15-year-old girl who accuse him of raping and taking advantage of her after feeding drugs and alcohol. [HuffPo]