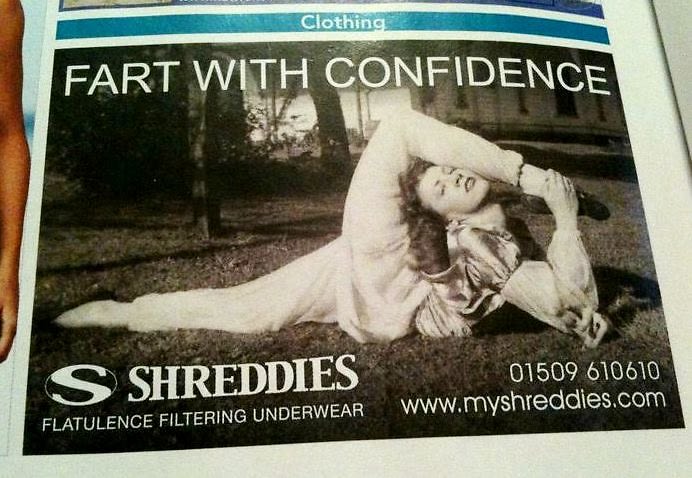 We're having a hard time holding it together here at the GofG L.A. office right now enough to share this with you. I think Alex is crying in his chair. It's because our dear intern Raina discovered one of the most incredible developments of the modern era, something civilization has had a need for since cabbage, curry, and Mexican food became part of the human diet. Or at least for those who feel shame in passing some gas or playing a little ditty on the butt trumpet in public. Behold Shreddies, the underwear that makes it okay for you to let one go, and ya know, just toot it out wherever you may find yourself. [Photo via]

Shreddies feature flatulence filtering technology, the same found in chemical warfare suits, to mask your foulest eruptions. Even after you've overindulged in hard-boiled eggs, chili, the cheese course and you're lactose-intolerant, these liberating undies allow you to feel free to rip ass as you please.

And let's just take a quick detour to discuss the above ad. What kind of position she's contorted herself into do you call that? Is that the same one skunks assume when they lift their tail to spray a threatening predator? She looks like she's ready to really blast some stank at someone, but with grace. See the pointed toes? Like the ad says, this is a fart with confidence. 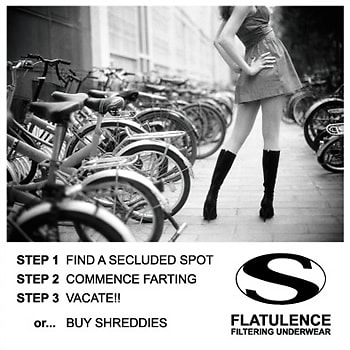 Of course, fart filtration that allows people to feel okay casually breaking wind at any moment does give rise to some concerns.  Firstly, when dropping bombs, especially the ones of the most aggressive potency, there is more often than not an audio component. Is there some sort of buffer or sound screen for when you let out a couple of Louis Armstrong notes?

And then we have the issue of the wet ones. Frankly, this seems like a recipe for a shartstorm. It's inevitable that Shreddies-wearers get so comfortable, they eventually miscalculate and unwittingly release air biscuits, and then we have a real problem. Shart City, guys. Shart. City. You've been warned.