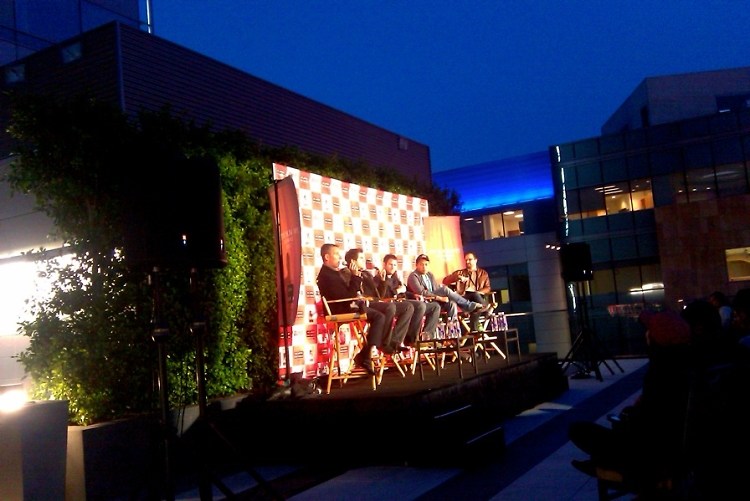 "It was almost out of fear of being left behind" said director Richard Kelly of his reasons for joining Twitter at last night's Power of the Tweet Poolside Chat for the L.A. Film Festival.  The chat was intended to bring together some of Hollywood's most Twitter-happy personalities, with a panel that also included filmmakers Jon Chu, Eli Roth and Adam Shankman, whom you may know best as the recipient of that infamous Miley Cyrus lap dance.

For those who think Twitter has peaked and is on the decline, think again. These Tweeters stand proudly by their Twitter handles and 140-characters-or-less statements to the world. In LA Weekly's rundown of the night, many interesting nuggets were revealed in Tweet Chat, which allowed for real talk on how the social networking craze has influenced everything from the panels' personal lives to the box office.

Want to get discovered by Hollywood? "I look at pretty much everything that comes in" said Kelly of the links people Tweet @ him. Seriously, he actually passed on a fan's YouTube video to his agent. Hear that struggling artists? Hop on the Twitter train if you're fighting for your big break!

And how has Twitter affected the directors' careers and showbiz in general? "Now with Twitter, there's no escape--if you've made a shitty movie, people know within 15 minutes of the first show this thing sucks ass." explained Roth. As for Shankman, the director has felt the burn of an overly sensitive public and sensationalist media in the wake of on seemingly harmless Tweets. Disney now has their cast and crew sign contracts prohibiting them from Tweeting from the set after the Shankman posted some scandalous photos of Miley Cyrus last year. "Please let it be called The Shankman Clause," he quipped. - But mind your Tweets, for they can and do provide a basis on which to be judged by the world. Roth referred to Ashton Kutcher's Twitter eulogy to Brittany Murphy, saying "I love Ashton, but when someone's trying to do something really profound on Twitter, I'm like, 'Go fuck yourself." Amen, brother. Don't act like you're not guilty of deeming someone an idiot after reading an asinine Tweet, or even hideous spelling and grammatical errors. It's only natural.