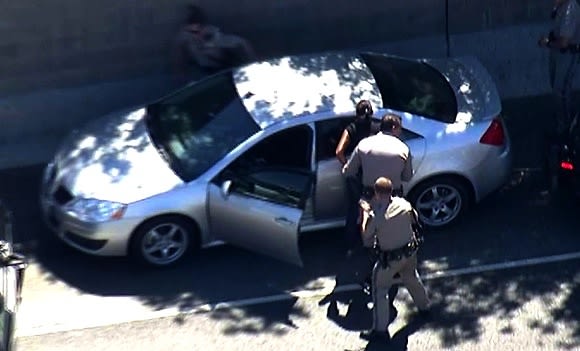 And another idiot whose half-baked plan to flee shockingly doesn't play out in their favor. This time, a suspect spotted shoplifting at Bed Bath & Beyond and Victoria's Secret led police on a high speed pursuit from a mall in Orange County which ended just minutes ago on the eastbound 101 near the Van Nuys exit. The woman finally came to a sudden stop on the freeway shoulder, but, in yet another stroke of genius, refused to get out of her car.  Police finally coaxed her out when they approached her silver sedan with guns drawn.

Despite her egregious stupidity and the obvious danger she caused everyone in her path as she weaved through traffic at up to 100 mph, there actually is something positive we can take away from the incident. Today will go down in history as the first time a modicum of excitement or something just outside painfully boring has occurred at Bed Bath & Beyond.

We've only dreamed of such things while having to shop at a place less stimulating than waiting in line at the DMV. I mean, at least there there's a bit of people watching. And you can pick up some spanish. By comparison, it's a rich cultural experience. So if nothing else, this lady's adventures in being a moron today provide the slightest glimmer of hope that maybe the next time you're experiencing suicidal thoughts while the merciless whining of John Mayer's "Wonderland" plays from store's sound system eternally set to the soft rock station as you're trying to decide between the tailored and gathered bedskirt, some imbecile will get a reaaalllly dumb idea.