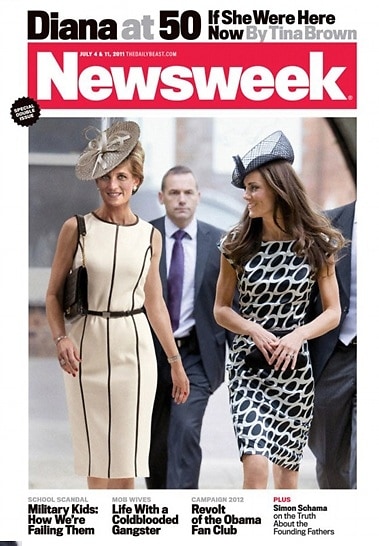 Grief, we are told, takes many forms, and in the course of attempting to remember and honor loved ones who have left us before their time, reasonable people may disagree on how to keep one's memory alive with dignity and respect.

That said, unless you watched that one Tom Petty video where he brings his dead girlfriend's body home and dances around with it and thought to yourself, "that is an excellent idea," you might find this week's Newsweek cover featuring a computer-aged Princess Diana photoshopped walking next to Kate Middleton to be in somewhat poor taste.

Ah, Newsweek covers: I thought you'd peaked a few years ago with "Lincoln Vs. Darwin," but in retrospect, that little historical cage match had nothing compared to the Royal Zombiepocalypse you've unleashed on us this week. Seriously, this is as bad as posthumously baptizing President Obama's mother, isn't it? If you were Prince William, would you want a magazine to run a photoshop of your dead mother as if she was alive and hanging out with your wife. Tina Brown, why not just pop Michael Jackson's head on the dude in the back and get really weird with it?

Anyway, Newsweek, ladies and gentlemen. Something tells me their offices won't be on William & Kate's USA itinerary.