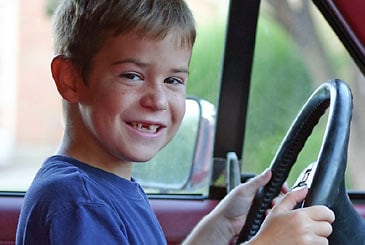 As a Southern California resident, you've probably had to go "pick up" your car at least once. Maybe you got too drunk the night before and wisely called yourself a cab, and good for you, but the next day, as you're begging your friends for a ride all the way across town, you might feel like a bit of a dick. At least you didn't make your girlfriend's 11-year-old son pick up the car and drive it home 40 miles on the freeway. Unless your name is Terry Varner, that is.

Yes, according to the ABC news report, Terry Varner had sold the car in question (a 1986 Toyota Tercel) to a guy in San Bernardino who never paid up. At this point, Varner, whose occupation was unlisted in the report but I'm guessing isn't a Driver's Ed instructor, had the brilliant plan to drive down there and let lil' Junior follow him home in the Tercel. "Home," of course, meant doing a solid 40 miles at about 65 mph, changing from the 215 Freeway to the 15 Freeway, and finally onto the 395 before a sheriff's deputy pulled him over in Adelanto.

A few things, here. Obviously, right off the bat, it's unacceptable to put a small child in danger like that for a 1986 Toyota Tercel. Do you know how much a 1986 Toyota Tercel is worth? Neither do I, because Kelley Blue Book, the accepted standard for trade-in and used car values, doesn't even list it on their website. I promise you, you own a pair of jeans that cost you more than you could get a 1986 Toyota Tercel for. If Terry had gotten ripped out of a Maserati Quattroporte, it still wouldn't be right, but hey, I'd understand. Plus, the kid would get to drive a Maserati. Win-win, right?

Besides, and this is my other point, do you know what kind of video games 11-year old kids play these days? They're piloting starships through asteroid fields, winning Grand Prix races, and guiding Hellfire missiles into the Kremlin thousands of times before their tenth birthday. Going 70 on the freeway was probably the most boring thing this kid did all day. At the very least, he's no more a danger than a Beverly Hills housewife in a gigantic luxury SUV, and that's an absolute fact. [Editor's Note: FACT. For years I've said there's nothing scarier than L.A. mothers behind the wheels of Range Rovers.]