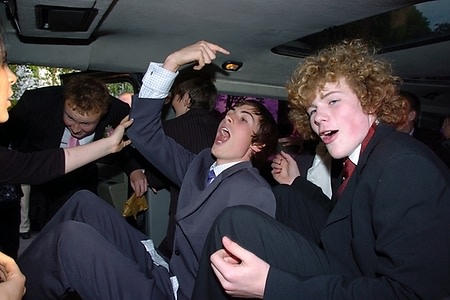 One of our great American traditions, aside from self-imposed Slurpee headaches, is prom. Just the whisper of taffeta brushing against a fresh pair of Dyeables gets high school students in the mindset for the most anti-climactic yet quintessential teenage experience. Now, the Wall Street Journal reports that the Brits want a piece of the punch-drenched action. Derided as a "ghastly import" to England's shores, the arrival of American prom is attributed to shows like the O.C. and American Pie, which would mean that our entertainment exports aren't released in Europe until a good five years have past because they're both laughably beyond relevance at this point.

Looks like they've moved on to Cribs for their social cues:

"[the students] arrived at their prom in a hotel in Surrey in a stretch Hummer, rented for about $1,470. Also pulling up: a vintage Rolls-Royce, five other stretch Hummers, six stretch limos, a firetruck emitting soap bubbles and fake smoke, and a vintage Triumph with a gloved chauffeur in a military uniform."