It recently hit us over the heard a) how slow and behind the curve CNN.com is, and b) how desperately hard they are trying to draw more traffic with sensational celebrity "news" and catchy titles. Take for example Andy Dick's recent misadventure in Ohio. It took them 4 days to report on it, and when they did, we asked ourselves WHY? We'd rather read news, not "news" when we go to CNN.

But what really annoyed us was their recent video portrayal of Whoopi Goldberg as trying to defend Michael Vick on The View. Even before watching the video, we took bets on just how ridiculously misconstrued their reporting would be. Well Whoopi of course didn't actually defend Vick, but rather tried to explain the magnitude of dog-fighting culture in the South and how Vick could have gotten wrapped up in something like this. 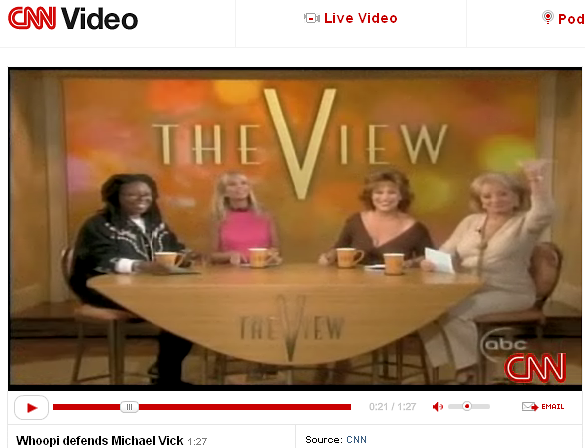 No one else seemed to think this was a "story" worthy of attention (news outlets and celeb bloggers alike). And yet it has been up on their website for over a day now (along with a slew of equally moronic videos). We expect this tortured reporting from other sources, but CNN should really get their act together and go and find their gravitas fast.