Today the New York Times reported on Freegans, a growing group of people who actively scorn consumerism and live off the detritis we normal people create.  No word yet on whether they espouse the ethos of free love, but don't be surprised if you see one of these guys scavenging around a dumpster near you.  But like most reactionaries, Freegans revolt against the very system that supports them, namely consumer waste.  We certainly applaud their move to go Green, but lets not completely go bonkers, we still need like our ipods and cell phones, etc.

“If a person chooses to live an ethical lifestyle it’s not enough to be vegan, they need to absent themselves from capitalism,” said Adam Weissman, 29, who started freegan.info four years ago and is the movement’s de facto spokesman.

Sorry Adam, but if we just up and did what you said, you'd have nothing to live off of.  Don't bite the hand that feeds!

Lastly, just because you find something free in a dumpster, doesn't mean its worth smiling about.  Wtf is this girl going to do with angel wings anyways? 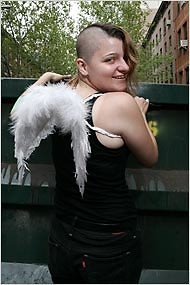