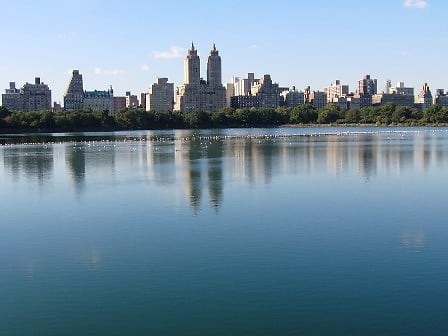 We love a good Indian Summer, which is the first and only piece of good news we got this morning.  Now for a list of the "news stories" we picked up on:

-Iranian president Mahmoud Ahmadinejad will be speaking at Columbia today which has no doubt already encouraged massive groups of protestors congregating on the UWS.  The cover of Daily News flashed the headline "The Evil Arrives", New York state Assemblyman Dov Hikind said Ahmadinejad "should be arrested when he comes to Columbia University, not invited to speak for God's sake", while, in defense of free and open debate, the Dean of the school said that they would invite Hitler to speak.

-Our own trusty leader George W. is in town today, and will be attending the UN assembly tomorrow, which means nothing more than we will all be expected to disrupt our daily commuting for awhile.  1st avenue is completely closed along with 44-46th streets on the east side.

-3 were killed in a fire in brooklyn

-An NYU college freshman committed suicide this weekend by jumping 15 stories to his death behind University Hall.  The first one at the university in 3 years, after 5 students took their lives between 2002-2003.

Wow.  A lot for us to take in before 10am.  At least the weather is keeping us smiling...