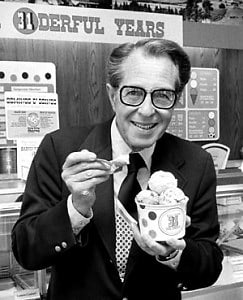 I remember the first day that my mom let me go to Baskin Robbins alone. It was only 4 blocks away from where we lived, but it may as well have been China for me...or New York even. Baskin Robbins was THE neighborhood scene. It provided me and my sister, as well as our other junior high comrades with unending "remember whens" both good and bad. And there were two men responsible for it all, not to mention the 31 flavors (though oh so many more) that they presented us with over the years.

"Without realizing it at the time, we were in the franchise business before the word "franchise" was fashionable. We opened another store and another and another. . . ."Robbins said in the 1985 Times story.

The "31 flavors" concept was introduced in 1957 to bring attention to a deep menu that featured a flavor for every day of the month. After his partner passed away in 1967, Irvine, who's favorite flavor was Jamoca Almond Fudge became the sole face of the company. What a life, to run such an empire as an icecream factory!

I have always said, and stand behind my claim, that an ice cream cone has such a rare ability of turning a bad day around...at least for a bit. How can anyone be down while eating an icecream cone with bubblegum cherry icecream and sprinkles? It's not possible. I am sure Irvine is in Ice Cream heaven as we speak. And the ice cream up there is fat free AND calorie free.