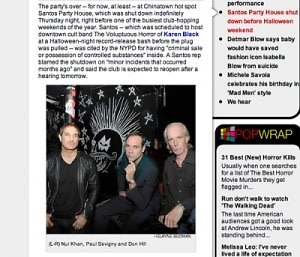 Gawker was all over the strange picture choice for the Page Six item about the closing of Santos Party House; the photo erroneously features Nur Khan, Paul Sevigny and Don Hill who do not run the Chinatown club busted for drugs. But we touched base with the New York Post editor-in-chief who defended his paper:

Gawker trumps up the mistake to a post-Richard Johnson era as if the Murdoch rag can't sustain its accuracy without its dogged gossip reporter, who moved to Hollywood to work on digital ventures for New Corp. Gawker points out several other mistakes the Post has made since Emily Smith has taken the helm.

It seemed strange for Page Six, which is supposed to have its finger on the pulse of New York night life, to associate Santos with Khan, Sevigny, and Hill, who co-own Don Hill's--the hot joint whose reincarnation this fall has been the cat's pajama's for scenesters. Of course, musician Andrew W.K., who co-owns the two-and-a-half-year-old club hit with a summons for drug purchases, should have been pictured if anyone.

But Col Allan, NY Post editor-in-chief, had a little correction of his own to file to Gawker's fact-checking department. In response to the Gawker accusations of an untidy ship, he cited web issues alone:

"The errors cited were not made on the printed Page Six but were made in the process of transferring the page online and in no way reflect on the Page Six editor or staff."

Allan has exculpated Smith from wrongdoing here and promised, but as Gawker's Brian Moylan pointed out to us, the initial string of errors that alerted him to Page Six's editorial shabbiness, did appear in print. Nonetheless, Allan said his staff is taking measures to improve the accuracy of the paper's online efforts:

"We are putting in place procedures that will stop these errors from occurring in the future."

Alas, in this day and age, the web iteration of a publication is just as important as the printed matter; an error is an error, whether on the interwebs or not, and any other view is antiquated. Gawker may be somewhat misguided in its agenda to scapegoat Emily Smith alone given that the latest error appeared online, but the critical instinct holds water against Page Six online copy editors given the frequency of errors that have been cropping up on the site (and indeed, in print).