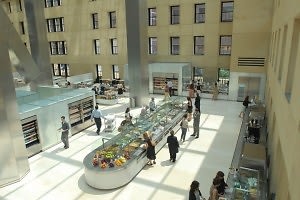 Working at an uber-publisher like Condé Nast or Hearst has long been the dream for thousands of young bright things in this country.  The allure of one day writing for a Vogue, Esquire, or even a Seventeen Magazine far outweighed the inevitable repeat of high school-like indignancies to be experienced in the hallways and cafeterias of said outposts.

Many, in fact, FLOCK over to the Hearst Towers or Condé Nast building just for a chance to intern for these old media titans and subsequently be rewarded with the satisfaction of knowing they are sitting tables away from Meredith Melling-Burke in the cafeteria. Some bitch work with a side of ricotta tart? Yes please. (Specially made, of course, as a low fat dish and filled with dandelion salad from the latest world class chef everyone's been talking about.)

Penetration into these cafeterias at 4 Times Square (Conde Nast) and 300 West 57th (Hearst Towers), "the epicenters of society journalism," as my friend calls them, has been such an attractive conquest that writers of another media, the -gasp!- social media (as we are calling them these days) have set about writing entire exposés on what it's like just to make through the cafeteria's doors.

Okay, so print media still has its seductions, and online journalists writers would still like to know what it feels like to eat lunch in the Hearst Cafe-although one sitting would surely satisfy their hunger (literally and figuratively). But, shockingly, it seems that on the flip side, those in print are more than eager to try their hands at the social media round table. 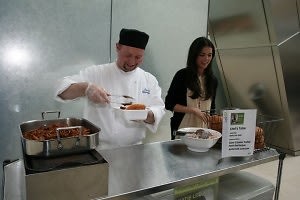 Hearst Cafe, er sorry, Cafe 57, has it's own Facebook page. Now anyone with an internet connection can hop online and see  the Barefoot Contessa shaking hands with Cathie Black (Hearst Chairman), or watch Katie Lee Joel grill up some pork (photo at left).

While we are feeding Stanley from a makeshift cardboard table on our rooftop on the Bowery, the folks over at Hearst Corp. are heading on over to The Asparagus Festival: An infusion of potassium, Vitamin C, and a fragrant, subtle flavor, The Cheese Festival, or The Strawberry Festival, or The Citrus Festival (all with equally elaborate descriptions).

Who says print media is suffering? 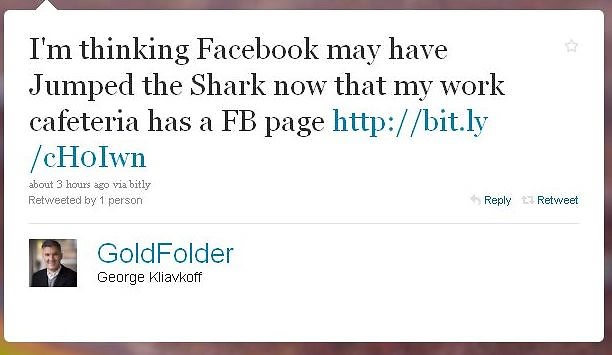 Or whether this is a new example of Hearst trying to break through the social media barriers (and, in this case, taking an undeniably original and savvy stab at it), it is surely an indicator of some new times ahead....at least for our cafeterias.