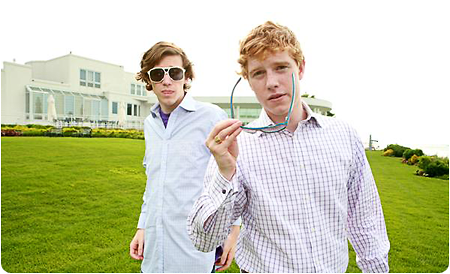 Chester French is the architect who designed the Lincoln Memorial and "The Spirit of Life." He's also a synth-rock band signed to Pharrell's Star Trak label, a band masterminded by two fresh-out-of-Harvard, button-down-wearing white boys. The tale of D.A. Wallach and Maxwell Drummey is one of dormitory sessions and persistent demo-distribution, of intuition and drily dirty wit. Most of all, it is one of talent, and the ability to put it to use. Below, the boys talk genre-bending, wet tee-shirt contests, and coveting their neighbors' physiques.

First of all, your name... What was its genesis? DA: We named ourselves after Daniel Chester French, the sculptor.

You have a pretty unique sound; can you describe your musical trajectories? Did you grow up in musical families? DA: I didn't grow up in a musical family, although my Dad did introduce me to Jazz, which was my primary interest at a couple of points in time. Like every kid, I took piano lessons until I was maybe 11 or 12. Then I started on drums and played until college when I began singing.

Max: My grandfather is a pianist and led a jazz big band when my dad was a kid. We had a piano around the house, so I started taking lessons on that when I was 3. When I was 8 or 9 I got really into playing guitar. In high school I started teaching myself jazz guitar and studying composition. I also got into playing drums and bass then. When we started making the album, I spent some time learning how to arrange for orchestral instruments and how to play a bunch more things. I've always been into all types of music, especially things that sound unique and different, so I'm constantly looking for new instruments and sounds as well as new ways to use them.

I read that you became friends your first year at Harvard, in the dining hall. Was there this instant connection? How did you decide to form a band? DA: We got along well right away. We decided to form the band a bit haphazardly with three other dudes who were also freshmen at school.

Max: We played as a band for about a year with the other guys before we started boiling it down to the two of us in the studio.

What's your thought to final cut process? Do you bounce ideas off of each other? DA: We usually start with an instrumental or melodic idea, send it back and forth and discuss different possibilities until we solidify song sections. The longest part of the process is usually figuring out how to put different ideas together so that they form a sensibly structured song.

Max: Once the song is structured, I'll arrange it through in my head and on paper and get the instrumental together. Lyrics usually come last.

Did it take a while for buzz to spread? DA: We've been doing this for nearly five years now and buzz is still spreading.

Max: Is that an STD?

Max: I don't know that there is much a "scene" in college rock. It's pretty disaggregated. And college is boring.

Also, every review of you I've read mentions the Beach Boys, but I don't see it. They're clean surf be-bop and you"re kind of naughty synth-rock. Or maybe I'm totally off the mark. How would you describe your music?

DA: I'll leave any sort of labeling to the critics. We certainly learned a lot from the Beach Boys but I don't think we sound like them.

Did you think, when you sent your demo to Star Trak, that they'd be interested? Your music isn't hip-hop or rap, but its genre-bendiness makes me think of Outkast or Danger Doom. DA: We always wanted to have that genre-bendiness, and it's something that the Neptunes and NERD exemplify, as well. We hoped that they'd appreciate it and it was great news that they did.

Max: We've definitely learned a ton from listening to Hip-Hop and other types of music our whole lives and try to express the diversity of our interests in our music.

You're touring the States now; what's been your favorite venue? Crowd? DA: We've had some really fun shows. Two that we especially liked were in Jacksonville, FL and L.A.

Max: I like any venue or crowd where at least one person starts getting naked during our set. Or in general too I guess.

Are you thinking of playing overseas? I have a feeling you guys would be huge there. DA: We just did our first shows in the UK and had a blast. We hope to play internationally as much as possible.

Max: We were the same size there.

Who would be your dream tour mate? DA: Pantera.

D.A., do people think it's funny that you're a red-headed, freckle faced Star Traker with a B.A. in African-American Studies? I feel you guys are so different that your, er, caucasianosity works in your favor. DA: I'm not sure if people think it's funny. I think they find it a little surprising, but I like surprises.