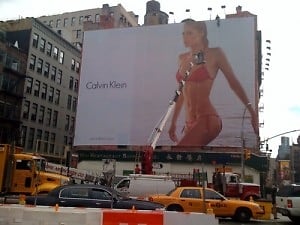 Breaking: The billboard that had us all talking will shortly come down, amidst uproar over its scandalous nature. More than a couple heads turned when Calvin Klein displayed a barely pubescent, topless girl in various stages of hook up with more than one gorgeous but no doubt ill-intentioned man, for all of Houston and Lafayette in Soho to see (as well as the billboard bystander, a third hunk lying on the floor next to the couch canoodling, his pants undone). Passersby worried,

"They always have ads that are pushing the envelope, but this one is the worst I've seen since I've been here. My biggest concern is that it gives teens the wrong idea." [via]

Well, now everyone can settle down a bit. This morning the stage one, second-to-third-base sex-capade came down, making way for a red bikini-clad babe, strolling against a washed out beach backdrop. So instead of potentially underage group sex (we hope they were at least planning on using protection!), the ad's now poised to inspire body consciousness among masses of teenage women. Oh well! 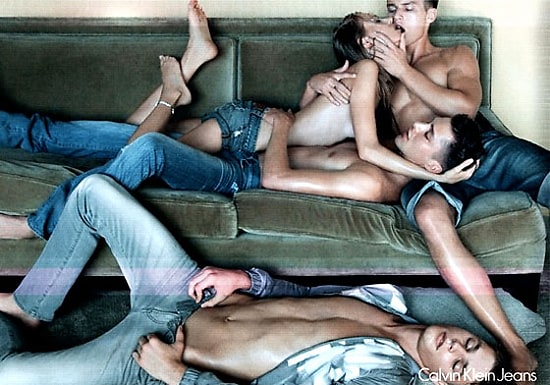