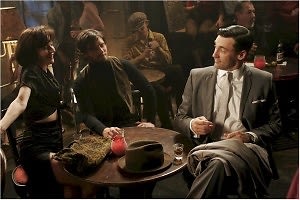 Oh, Don. He was never cool enough for Midge, not really, and that became embarrassingly apparent when he accompanied her to The Gaslight Cafe. No wonder she didn't go to Europe with him. But it's season 4, and Don's a new man, living on 6th and Waverly...-

Free of Betty, free of the kids (most of the time), Don's moved downtown, so it's only fitting he should try to find a new, downtown, Bohemian bar.

But it's hard to teach an old dog new tricks. He still needs something RELATIVELY established, even if slightly more boho chic than the UES haunts he'd go to with Roger.

The White Horse tavern has always been slightly beatnik-y, and a long-time fixture of the West Village. Dylan Thomas famously drank himself to death there about ten years before Don would have started attending, but maybe the intrepid ad man could have befriended Jack Kerouac or Allen Ginsberg (or at least gotten some creative inspiration for them?)

We hope you join us tonight for some beers and some good times as we drink to a new Don.

Do you want your Bar/Restaurant as our next featured Pop Up Party? Email Rachelle@guestofaguest.com to get started!