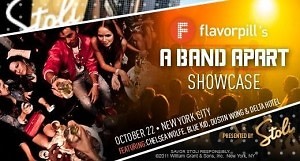 Come celebrate the end of the CMJ festival with Flavorpill and Stoli Vodka on Saturday! See below for details...

With CMJ week coming to a close, there are still hundreds of showcases happening in Manhattan and Brooklyn tonight and tomorrow. The one we're making sure not to miss is Flavorpill's A Band Apart Showcase, presented by Stoli vodka. The line up includes Delta Hotel, Dustin Wong (of Ponytail), Blue Kid, and belle of the festival, Chelsea Wolfe. For those who didn't catch the dark, enchantingly ethereal Chelsea Wolfe at her other CMJ performances this week, this is the chance. She's had praise lavished on her from MTV, Self-Titled and Pitchfork, not to mention an upcoming debut in Vogue, and is definitely one of if not THE CMJ showcasing artist to catch. Flavorpill's showcase will also feature new talent, Blue Kid, the winner of this year's 2011 A Band Apart competition, presented by Stoli vodka.

Want to join Flavorpill and Stoli there to catch all the action?

There are limited spots available for the free show on October 22nd, from 6 pm to 10 pm at Le Poisson Rouge. RSVP is still open in Stoli’s Facebook page. (Arrive early for complimentary drinks from Stoli!)