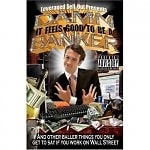 The "Borat of Wall Street", Amit Chatwani chose a smart career in blog land.  His site Leveraged Sell-Out, one of my favorite banker blogs, is a look at the insides of what it means to be a young banker living in New York (he draws on the experiences of all of his friends).  This week, Amit has unleashed his first book based around his ever-popular site. "Damn It Feels Good To Be A Banker, And Other Baller Things You Only Get To Say If You Work On Wall Street" is a must read for anyone working in finance, anyone that knows anyone working in finance, or anyone that wants reassurance that their job outside of finance was the right decision.

Below, some of my favorite excerpts from the book and a photo guide to a banker's evolution:

That fall, I moved into an apartment in one of Tribeca's most exclusive areas with seven guys from school. Five guys ended up living in an apartment upstairs, and three of us took a place directly below them.

Getting the apartments was a breeze; when our Russian landlord saw the names Goldman Sachs, Morgan Stanley, and Blackstone written all over our applications, his face lit up with delight. "Gold men and sex!" he proclaimed, prophetically. He was so confident we'd be good tenants, he even offered us a "very special rate."

Cheap things generally suck, so we doubled it.

On Wharton:I'll concede that a lot of prestigious Bankers do come from Wharton. But the fact that it is attached to the University of Pennsylvania is Wharton's biggest and most tragic downfall. In and of itself, Wharton is a fairly exclusive place, but the nature of its being lumped together with a big, ugly mass of mediocrity creates insecure, overcompensating alumni.

As a result, you will never hear a Wharton grad admit he went to UPenn. Even if he snuck in through the back door to Wharton after his second year, he will undeniably declare "Wharton" when he meets you, like a leper proudly extending his one good finger to shake. I see the rest of your disfigured hand, buddy, and it's revolting. [From Radar]

"I want random dudes in Morgan's Istanbul office calling me up, asking for this thing in Turkish."