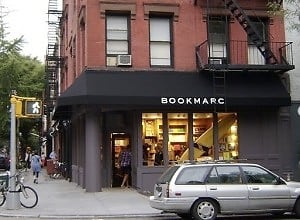 Marc Jacobs' colonization of the Village continues. But might he save the ailing publishing industry as he compromises (as some accuse!) the soul of a once-literary neighborhood? Jeremiah weighs in, saying he's seen the future of bookstores, its name is Bookmarc and it isn't pretty.

Well, the store itself is pretty, but what else would you expect from Jacobs? According to Jeremiah, the problem lies in the store's aesthetics distracting from its literary cred. You can't judge a book by its cover, but you might able to judge a bookseller by its excessive attention to organizing books by the colors of their spines. (Insult to injury: Bookmarc replaced real bookstore Biography.)

Branded leather bags, totes and keychains do battle with the actual books on offer at Bookmarc. You know how scruffy, bookish types sling their faded Strand totes over their shoulders with pride as they navigate the NYC subway? A Bookmarc tote is like that, except for bookworms who opt for chauffeured Town Cars and Escalades over the F train.

Blank notebooks are the only items that recall titles you might see in traditional independent bookshops. Stenciled on the covers are titles that riff on American classics:

"As I Lay Tanning"

There's also a photography book, "Getting to Know My Husband's Cock."  It is not about poultry. There are the usual big, fat, glossy fashion bibles, designer biographies and odes to Warhol. Jeremiah did find two (two!) novels. Both are by Francine Prose, a friend of a friend of Jacobs who wrote the forward to "The Men and Women of Marc Jacobs."

People gave Oprah a hard time for her sometimes schmaltzy and mostly commercial Book Club picks. But she sounds like a modern day Gertrude Stein in the context of Bookmarc. Here's Jeremiah's takeaway on Bookmarc and its patrons:

"Cool and hot, the Marc Jacobs family undoubtedly includes his faithful customers, who are more like disciples, all oddly similar in their vests over t-shirts, their Sinatra hats and leather wristbands, their thumbs flying over iPhone faces and iPod click wheels...Most are too busy texting LOLs to read...You'll find fashion accessories mixed in, like cheese poured over broccoli, to make the medicine of even these digestible books go down more easily."