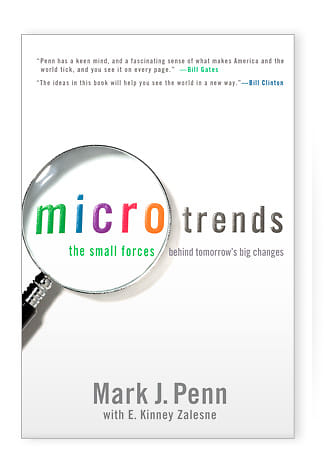 According to The Washington Post, Mark J. Penn is "The most powerful man in Washington you've never heard of".  Having just finished his most recent work: "Microtrends: The Small Forces Behind Tomorrow's Big Changes", we can tell why.  This book was awesome.  First it's a good book to read while traveling because it is divided up nicely into 75 "Microtrending Groups" that are shaping our country.  Remember the legendary swing voters of the late 90's, the "soccer moms"?  This is the guy that coined that term when he was serving as President Clinton's campaign advisor (he is currently working for his wife).  He has also worked for over 25 heads of states.

In the book, he talks about the power of the smaller groups.  Our world is no longer shaped by the mega trends we think of, as 1% of our population in this country (3 million people) are capable of making a business successful or creating a social movement.  He identifies the "Teenage Knitters", the "Impressionable Elites, "Archery Moms", "Neglected Dads", "Late-Breaking Gays", and "Extreme Commuters" among others.  As you read, it's easy to pick out people you know that fit extremely well into a group...some even yourself.  Mark points out that the power of individual choice has never been greater, yet we are quite the contradiction:

"And indeed, the contradictions today are striking. While people are eating more healthful foods than ever, Big Mac sales have never been higher. While Fox News is number one in the ratings, the antiwar movement dominates most news coverage. While America is growing older, most of what we see in advertising and entertainment has been created with youth in mind. While people are dating as never before, they have never been more interested in deeper, longer-lasting relationships. While more people than ever before are drinking clear, natural water, more people are also drinking "monster" energy drinks loaded with chemicals and caffeine."

"In fact, the whole idea that there are a few huge trends that determine how America and the world work is breaking down. There are no longer a couple of megaforces sweeping us all along. Instead, America and the world are being pulled apart by an intricate maze of choices, accumulating in "microtrends"—small, under-the-radar forces that can involve as little as 1 percent of the population, but which are powerfully shaping our society. "

Great read.  This guy is perhaps the best thing that Hillary has up her sleeve.  His success in winning her presidency has yet to be determined.