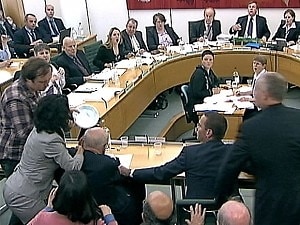 Things are getting even messier for Rupert Murdoch. Literally. As the News Corp. chairman and CEO's went before Parliament today for the hacking scandal that took down the News of The World, he was attacked! By pie! There's video...

A comedian named Jonnie Marbles tossed an old school shaving cream pie at Murdoch when his wife, Wendi Deng Murdoch, leaped to her feet to protect him. She was knocked to the ground, but that didn't stop her from defending her hubby.

Ben Felton of the Financial Times Tweeted the action:

"Rupert murdoch pied by prrotester. His wife slaps protester. Then she picks up pie and shoves it in his face."

"The man was dressed in brown plaid shirt. Had been sitting three rows back. Said nothing as he pied Murdoch. After sd Murdoch was greedy."

"Tom Watson tells Rupert M: your wife has a very good left hook. From where I sat 6 feet away, I wouldn't argue with that."

Marbles was arrested and public and press were escorted out of the room.

Just before the attack Marbles himself Tweeted:

Wendi was even faster then Rupert's security. Those are some lightening fast reflexes. James, for his part, was unsurprisingly not all that useful in protecting dad.