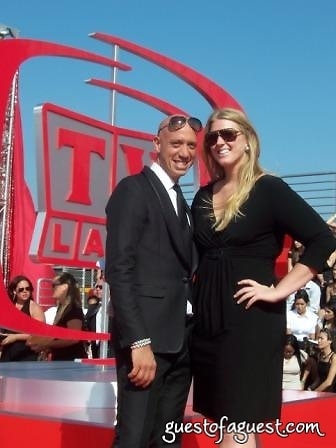 I'm back to traveling! Instead of leaving the country, I headed West to Los Angeles for the TV Land Awards. The show airs this Sunday night on TV Land and taped last Sunday. Robert Verdi, TV Land's favorite new personality, invited me to join him as he hosted the TV Land pre-show red carpet. So, I packed my carry-on bags and slipped out of the city in the middle of the heatwave last weekend.

Robert and I landed at LAX and immediately decided that our first night there, we had to try Eva (Longoria)'s new restaurant, Beso. Lucky for me, not only does Robert style Eva, but he also styles KathyGriffin. The three of us headed to Beso in Kathy's new Maserati aftera stop by her house to get her dress ready for the awards show the next day. Kathy, being the funny and friendly woman that she is, let me hold her Emmy! Talk about laugh out loud...I had to snap a pic with my Blackberry, obviously.

We ran into Katherine Hiegl and TR Knight (Grey's Anatomy) also dining at Beso, said hello to them and went up to our table on the second tier, where Paula Abdul's young ex, JT, the manager of Beso, briefly joined us. (Just picturing a young hottie like him kissing crazy Paula made me shake with laughter.)

Beso had great food: the flatbreads, guacomole and steak were all delicious. It is definitely worth a stop for a good meal and a little celeb-spotting if you are out in LA. Kathy insisted we finish off the meal with each of us ordering our own plate of mini-churros and ice cream sandwiches. She was wise in her decision. Robert, Kathy and I ate it all. As you can imagine, the conversation was nothing short of completely entertaining and enjoyable. Kathy is more fun in person. And soooo skinny.

On Sunday morning, Robert and I headed to Santa Monica to the airport, where the TV Land Awards were taking place in a hangar. I watched Vanessa Williams perform her dress rehearsal as host while Robert got ready in his trailer. (His trailer was conveniently sandwiched between Justin Timberlake's and Lionel Richie's.)

As the stars began pulling up in their limos, I began my job of escorting them to Robert for their TV interviews. At one point I was guiding Betty White and Bea Arthur (The Golden Girls) up the steps with both of them holding onto my arms. I chatted with Garry Marshall, Henry Winkler, Rainn Wilson, Roseanne...brilliant, creative minds. It was a dream and I managed to take a moment to snap a photo of Robert interviewing each group of celebs.

The glory of the TV Land Awards is that they combine the new with the old, so Justin Timberlake, Mike Myers, Robin Williams, Teri Hatcher, Steve Carell and many other of today's hottest stars are also in the show. It gets even better when Lionel Richie performs his hits--the show is so much fun!

Robert and I watched the show from our table with his fellow She's Got the Look castmembers and then headed to the afterparty at Casa del Mar on the beach in Santa Monica. Robert headed back to NYC thatnight, but I wanted to stay to visit friends, so now, here I am, finally back in the city. And the heat wave is over!

And here's a little LA gossip for you...

Samuel L. Jackson was not happy to learn that Will Smith is big into Scientology.

Eva Longoria is not pregs...yet!

John Mayer and Jen Aniston are no joke - he's practically living with her.