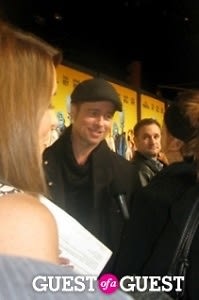 The new Dreamworks flick Megamind premiered in NYC last night at AMC Lincoln Square in 3-D. Will Ferrell was absent, having been present along with Justin Bieber at the LA premier, as was Jonah Hill, but Ben Stiller and Tina Fey were in attendance.  Oh, and Brad Pitt.-

Brad is predictably sexy in a make-your-knees-weak kind of way.  That rumor that his face is pock marked is pure myth. He's also taller at 5'11 than most actors whose tiny stature always lends to surprise when seeing them in person. Will Ferrell had previously stated that '[He is] extremely nice, and like you would think, he smells of cinnamon, when you picture Brad Pitt, like fresh baked bread and cinnamon," but he may have just been eating Cinnabon at the airport that day because there was sadly no scent of the comfort spice.

Will was right about him being nice. He's actually, for a tabloid legend and one of the biggest names on the silver screen, incredibly soft spoken. He has a library voice and also seems pretty over the hubub and chaos that surrounds movie premiers.

It's not without reason. Reporters ask dumb questions. It's not their fault, it comes with the territory. When you're speaking to people who have been asked everything under the sun, you want something new. When the event is a movie premeire, the questions tend to be topical to whatever the film is about. So in this instance it was a lot of "What would your super power be? Who was your favorite super hero?" to which he would laugh, look bored, give off that vibe that he thinks whoever asking is probably an idiot but doing their job, and then politely answer after being asked for the 10th time "Being a father," and "The Dark Knight."

He also has a habit of touching people on the arm while they are speaking causing at least three female reporters to squeal with delight after he was finished speaking to him. That's three limbs that will be shown to friends to inspire jealousy.

To get an idea of his facial expression that denoted boredom masked in duty, take a look at his beautiful mug while the photogs go insane over his arrival.

Maddox and Pax were snuck into the theater where Brad joined them for the film.  Rachel Dratch, Stephen Baldwin, Melissa Joan Hart and her kids, and the guy who plays Kenneth the Page, Jack McBrayer, were also in attendance.