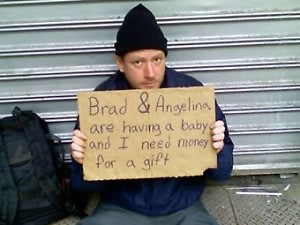 The ever-generous Oprah was in the Meatpacking District this weekend blessing commoners with her mere presence and one lucky panhandler with $100 which he used to buy undies, booze and steak. It's a nice chunk of change, but she's not the only A-Lister to help the homeless.  Who else has given big?

Heidi Montag and Spencer Pratt tie Oprah in monetary value, giving someone on the street $100. Sure they did it while posing for paparazzi, but the former Hill's stars don't do anything  without cameras around. If Heidi screams she's getting another boob job and no one around to capture it on film, does she even make a sound? No, and I doubt the receiver cared what her intentions were.  $100 is $100.

Colin Farrell helped a homeless man named Stress while he was filming a movie in Toronto. He took him on a $2,100 shopping spree and gave him $830 cash to rent a room.

Though he is known for his bad temper, he is actually a nice guy. Russell Crowe gave "Radio Man," his winter coat when he discovered the homeless man road his bike to Pittsburgh to see him working on the set of his new film The Next Three Days.

Lindsay Lohan visited a homeless shelter in LA between rehabs this past September. She hung out with teens and gave them all designer purses, which is kind of like giving a legless woman Louis Vuittons.  Every little bit helps though and they can always sell the bags on eBay for something edible or that they could live in.

A few years ago Britney Spears was spotted rolling down her window at an intersection in LA and handing a man $300 with the wish to have a Happy New Year.

True Blood's Anna Paquin doesn't let leftovers go to waste. After hosting a party at her home she took extra food out to the homeless. 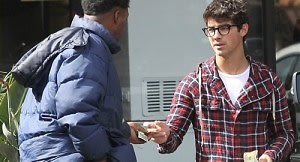 Joe Jonas was spotted giving money to homeless man, fueling rumors he was buying crack. It turned out he was just being a good Samaritan, but after today's news that his ex Demi Lovato is in rehab for cocaine, someone may want to go back and investigate the picture.

Ozzy Osbourne takes the prize for most giving. When he found his pockets empty after being asked for change by someone on the street, he gave the $3,000 crucifix around his neck. Whether he was high on drugs or not doesn't matter, he gets bonus points because it was personal.

And those are just a few of the celebs who give face to face on the street.  Almost all of them, including biggies like Bono, Angelina Jolie and Brad Pitt, and Paul McCartney give heavily to major foundations and charities. It's wonderful and needed, but doesn't have the same visual impact of one individual meeting Oprah on the street, briefly wondering if they've finally lost their mind, and then realizing miracles do exist.