If it wasn't for celebrity beef, the biggest drama at Fashion Week would be which designer is copying which - boring.

On Friday night, the tension between two rap queens reached a head (in more ways than one) at none other than the much buzzed about Bazaar ICONS bash. And while we're sure The Plaza has seen some shit, it's probably nothing compared to what just went down. We're talking hair pulling, shoe-throwing, and one serious bump on the noggin.

The altercation reportedly occurred on the second-floor balcony while most guests were catching the Christina Aguilera performance. Cardi B, who had gotten to the event first, was apparently waiting for Nicki Minaj to step off the red carpet when she confronted her about comments she made about Cardi's newborn daughter with fellow rapper Offset.

While it's unclear who made the first move towards a physical fight (one witness told Page Six Cardi was pushed from behind, while others say she started it), video of the incident shows Cardi lunging towards someone and being subsequently held back. Of course, each singer was surrounded by her entourage, who also seemed to get involved. At one point, Cardi's dress ripped entirely down the back, leaving her more than a little exposed. And though she was being held off by security, Cardi grabbed one of her red shoes and chucked it at Nicki.

stroke="none" stroke-width="1" fill="none" fill-rule="evenodd">
View this post on Instagram
Cardi B and Nicki Minaj brawl. Not my finest photography moment but it was a melee. You can hear Cardi yelling tho. #cardib #nickiminaj #bazaaricons
A post shared by Mara Siegler (@marasiegler) on Sep 7, 2018 at 10:58pm PDT

After they were separated, only chunks of hair were left. Oh, and a lone shoe.

stroke="none" stroke-width="1" fill="none" fill-rule="evenodd">
View this post on Instagram
Looks like #CardiB was mad that someone said something about her child 👀 •••••• Actual footage of Cardi throwing her shoe 👠 😩 #Cardib #nikkiminaj #nycfashionshow #bazaaricons
A post shared by Baton Rouge's Culture Branch (@batonrougespeaks) on Sep 7, 2018 at 10:03pm PDT

Images of Cardi being escorted out of the event show a massive knot on her forehead, though her makeup seemed impressively intact.

On Instagram, Cardi posted the below statement addressing the issue: 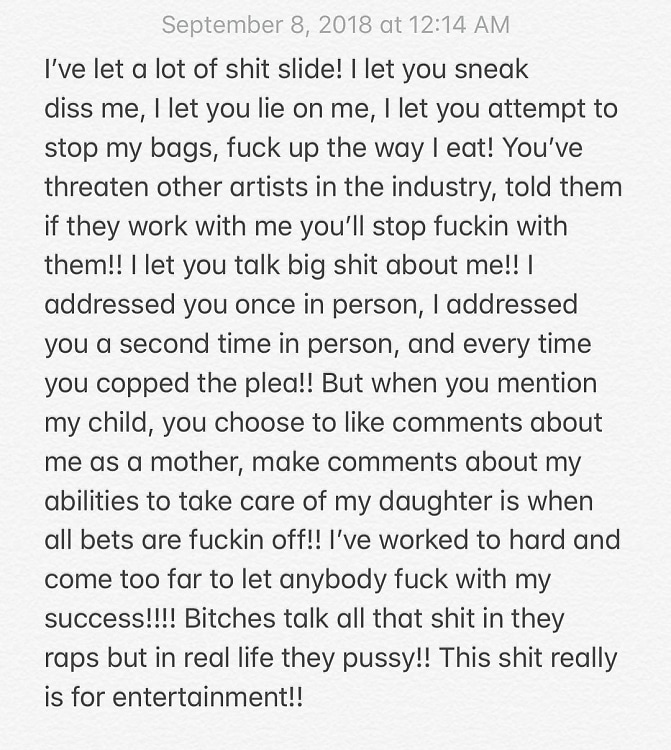 Of course, the memes comparing Cardi to Solange have already begun...