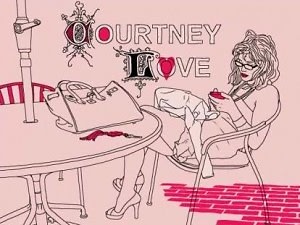 Once upon a time, on Prince and Mercer Streets, there lived a young girl named Courtney Love, who had a BFF named Karl Lagerfeld, and who struggled with esoteric questions such as "Who the fuck am I?" So she did what any rockstar would do: she commissioned someone to make a cartoon.-

"Why can't I be dignified like Chris Martin from Coldplay?"

The fact that at the restaurant, Andre Leon Talley is eating a lobster and Courtney is eating an ice cream sundae.

The fact that the movie is called "The Dark Night Of The Soul".

The fact that the she's credited with the epithet "The Best Fuck Ever", possibly due to the fact that, as she tells WWD:

"One of the stills was photographed after I had the best sex of my entire life."

Courtney Love• The Dark Night Of The Soul• Michael Mouris